Raising awareness of modern slavery in the West Midlands

There are an estimated 13,000 people living in the UK as slaves. Birmingham alone has seen a 100% increase in recorded instances of modern slavery in the past year.

In order to raise awareness of the prevalence of modern slavery in the West Midlands, and the devastating effects it can have on health, Arden & GEM brought together key agencies and organisations (including the NHS, West Midlands Police, Birmingham City Council and the West Midlands Anti Slavery Network) as part of a hard hitting campaign.

By designing a campaign that grabbed the public’s attention, launched by a live performance in Birmingham City Centre, extensive media coverage was achieved reaching more than 3 million people and resulting in a 30% rise in contacts to the Modern Slavery Helpline. 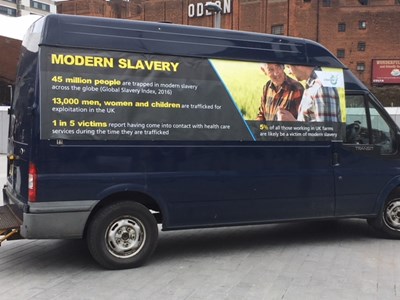 Trafficking in the UK can happen anywhere. The National Crime Agency reports that there are currently 300 live policing operations in the UK, affecting every large town and city, with an estimated 13,000 victims nationwide.

Birmingham alone has seen a 100% increase in recorded modern slavery in the last year. But despite the increase in reporting, many of the offences that occur in communities still go unreported with the general public not recognising the various signs of trafficking.

There is no typical victim of modern slavery; they can be any age, gender, class, nationality or ethnicity. Anyone can be affected and, more often than not, they are hidden in plain sight – working in nail bars, food outlets, car washes, factories or our fields.

The health effects on victims of modern slavery can be devastating. According to a report published by Public Health England in December 2017:

Our communications and social marketing team worked with key agencies and organisations, including the public and third sectors, to better understand both the campaign objectives and wider issues involved. This enabled us to produce a campaign proposal that would raise awareness and increase incidence reporting.

In order to achieve maximum impact, the proposal centred on a launch event, followed by a programme of supporting activity. We liaised with all agencies to gain campaign approval and sign off on messaging and materials.

With many different organisations involved, it was important that all campaign materials used a uniform and consistent brand. Our in-house graphic design team developed the ‘Liberate’ brand for this purpose.

A campaign creative was needed that would grab the public’s attention. An approach using mock job adverts to highlight the incredibly poor conditions that modern slaves can experience in commonly visited locations, such as nail salons and car washes, was devised. This was applied to posters and event display materials.

The campaign launch centred on a live performance by actors outside the Bullring and Grand Central, which took place using a transit van (often the vehicle of choice for people trafficking). As well as providing an immersive experience for the public, the performance also provided a unique hook for media coverage, which was enhanced by having a wide range of stakeholders – including a trafficking victim – available at the event for interview.

Regular social media posts were made throughout the campaign, with suggested content and schedules shared with key agencies to actively encourage their online support. The campaign launch was complemented by a social media ‘Thunderclap’ to reinforce the public relations activity.

Following on from the campaign launch, further activity included:

West Midlands Police has commissioned a further regional roll out of the campaign to include an additional 20 community outreach events.


More on this service